What Is a Stock Buyback?

When a publicly traded company repurchases outstanding shares of its own stock on the open market (or directly from existing shareholders), this is known as a stock buyback. When a stock buyback occurs, two things happen immediately—the number of shares outstanding decreases, and the proportion of the company each share represents increases.

In other words, after a buyback occurs, existing shareholders (assuming they didn’t sell any of their own shares back to the company) suddenly have an increased stake in the business, both in terms of their percentage ownership and the weight of their voting rights. A stock buyback is often described as a company “investing in itself.”

Why Do Companies Repurchase Shares?

Generally, companies repurchase shares when they have “extra” cash on hand that is not already slated for other investments or operations. This is usually done for two reasons—to increase share value for investors and to reduce share dilution.

Because price is a product of supply and demand, reducing the supply of shares on the market should increase demand, which should, in turn, increase share price, thus delivering additional value to existing shareholders.

Because buybacks are known to increase share price, just the announcement of an upcoming buyback often drives shares up in price as investors scramble to buy in before the buyback.

What Are the Effects of a Stock Buyback?

Stock buybacks have a multitude of effects across several areas. They affect shares, shareholders, financial ratios, and the company itself.

As mentioned above, stock buybacks should—in theory—drive stock price up for several reasons. First, if demand for shares remains the same, but fewer shares are available, shares should trade at higher prices due to their relative scarcity.

Second, since buybacks require valuable cash, companies usually conduct them when they aren’t in desperate need of funds to pay off debt or finance important operations. For this reason, a buyback can be seen as a sign of financial health and stability, which can make a stock more appealing to investors, further driving its price up.

Since buybacks reduce the number of shares a company has in circulation, each remaining share represents a larger stake (and more voting rights) in the company. This is a plus for shareholders, as the more of a company they own, the more upside they will see if the company increases in value. Additionally, each share will have a larger impact in terms of its holder’s voting rights when it comes to decisions that could affect a company’s future success.

Further, since buybacks typically drive share price up, existing shareholders stand to benefit from these repurchases in the form of capital gains.

When a company conducts a buyback, it spends cash that could have been used for any number of other purposes, including paying down debt, hiring, research and development, or the acquisition of new plants, property, or equipment. In other words, its assets decrease.

However, buybacks can also stir up publicity, instill public confidence in a company, and cause its stock to rise in value, which can help it secure additional financing and new investors.

Lane Eight, The Best Sneakers For You And The Planet, Relaunch With NEW US Website And Continued Mission To Disrupt The Footwear Industry

Sat Apr 23 , 2022
NEW YORK, April 21, 2022 /PRNewswire/ — Lane Eight, the world’s best workout shoes for you, and the planet, is relaunching in the United States with a new website and a slew of new releases set to be introduced in the coming months! The Lane Eight range. Founded by brothers […] 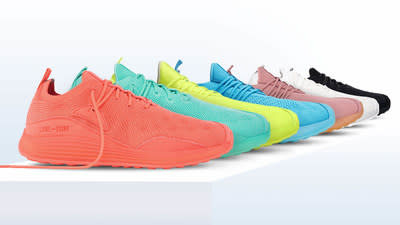